This is the 3rd post in my Azure Storage Performance comparison. So far we've examined the typical scenario of storing/retrieving data that most dynamic websites of today deal with. In this post, we'll take a closer look at Update and Delete - and finally review the financial aspects.

Let's start where we left of in the earlier posts. By now we've completed half of the CRUD (Create, Read, Update, Delete) test and the last two parts are left. Again, we're working with a dataset of 1 million StackExchange questions in various forms of storage.

The update scenario I have chosen is again trying to be as realistic as possible: An answer has been added, so we'll increase the "AnswerCount" by 1. Again, we'll do this 1000 times with randomly picked data in the dataset, and we'll do it in the most optimal (but this time sequential and one-by-one) way for each data store.

As per usual I asked my fellow tweeps what they'd expect:

Tweeps! Final poll for my @Azure storage performance blog post series: Which service would you expect to be fastest at doing 1000 sequential random updates in 1M dataset?

One thing to note when we examine the results is that when it comes to Blobs, Table Storage & Cosmos, I had to get the object first, then add 1 and then save it back - where as with SQL Azure I could get away with a simple "UPDATE test SET AnswerCount = AnswerCount + 1 WHERE Id = @Id" statement. There might be a similar smart way to do it with Cosmos (I've noticed there is some kind of stored procedures) but since I'm using the Table API to Cosmos, I didn't see any obvious approach other than using the same as I did with regular Table Storage.

Let's check out the results: 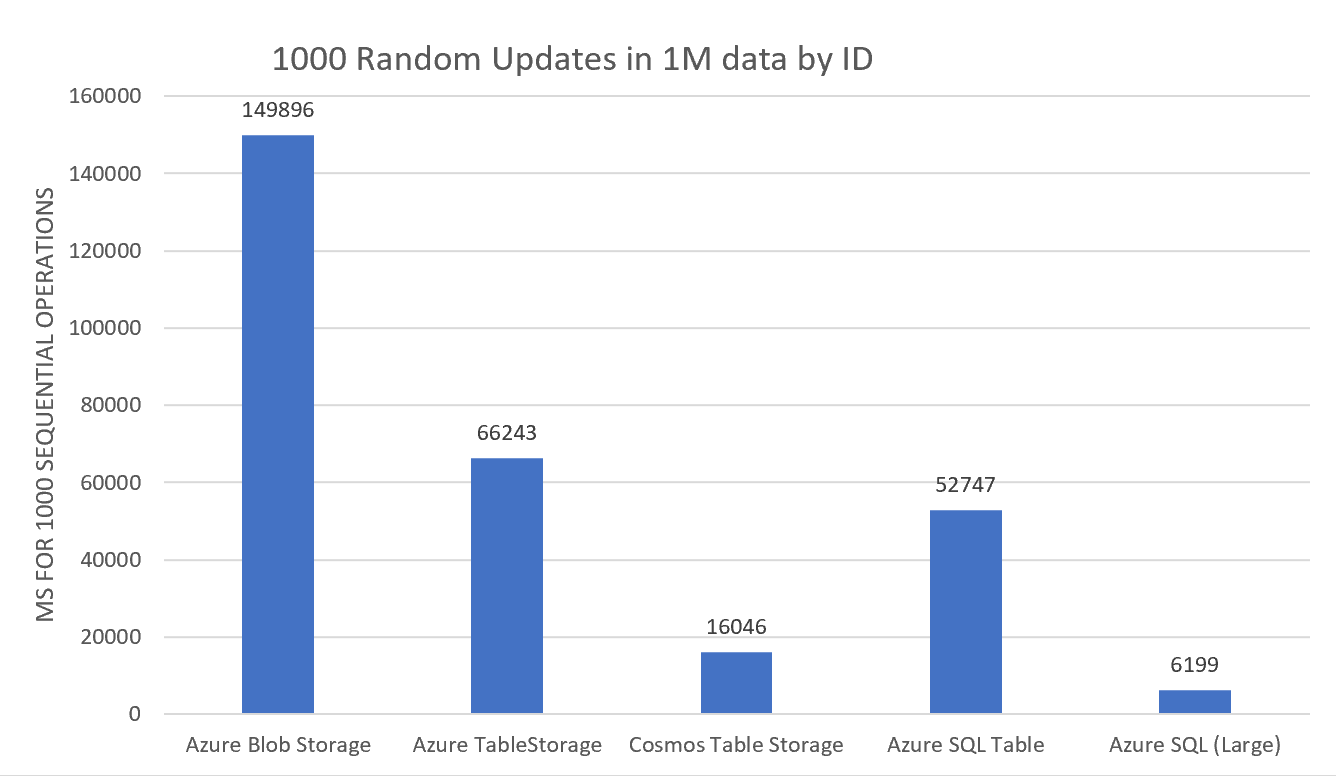 Not surprising we have Blob storage on the slow end with 150 ms per operation on average. But remember it has to fetch a json file, deserialize it, add, serialize it and re-upload the file to the server. Table storage comes in second place at 66 ms. Not bad considering it goes through a fairly similar flow. Meanwhile I'm surprised both that the S0 SQL server is so slow at it - but then again, it's been slow all along - and I think it's worth keeping in mind that if you go with SQL you want to put enough power behind your operations to not spend your life waiting for the requests to complete :-) When it comes to the tweet, I think we can declare Cosmos once again the clear winner (as the S3 SQL server wasn't an option).

Now, considering deleting an object. The setup is the same as we know it. 1000 randomly picked ID's should be deleted from the 1 million records dataset. 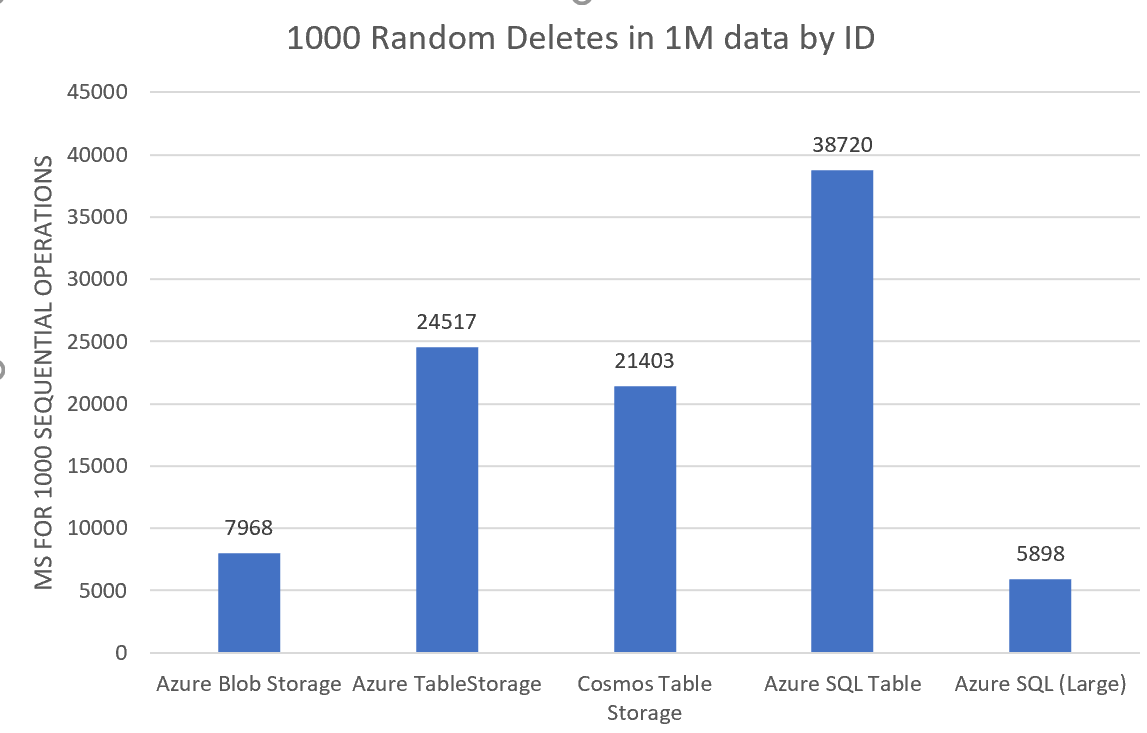 Wow! Can it be? Do we really have situation where Blob storage is the winner? Well - I think the answer is fairly straightforward here: Since the ID is the filename, deleting it is simply a single call to Blob storage with the command to delete a certain blob. It might not even be deleted straight away, maybe just marked for deletion and it'll then happen soon after. Who knows. Both TableStorage and Cosmos are challenged by the fact that the Table API's DeleteOperation takes a full Entity, which means that we first have to fetch the full entity like this:

Now, why SQL Azure S0 is so slow, I have no idea - but we can at least appreciate that it's slightly faster at deleting than it is at updating...

That's all fine and great - but let's get down to business...

If we look across all of these options there are several factors to take into account. One thing is how they perform when you call them once - but scaling both in terms of data-volume and in terms of simultaneous calls is also very interesting. And for some of us, young starving coders and data-addicts, price also plays a significant role in picking the right storage. 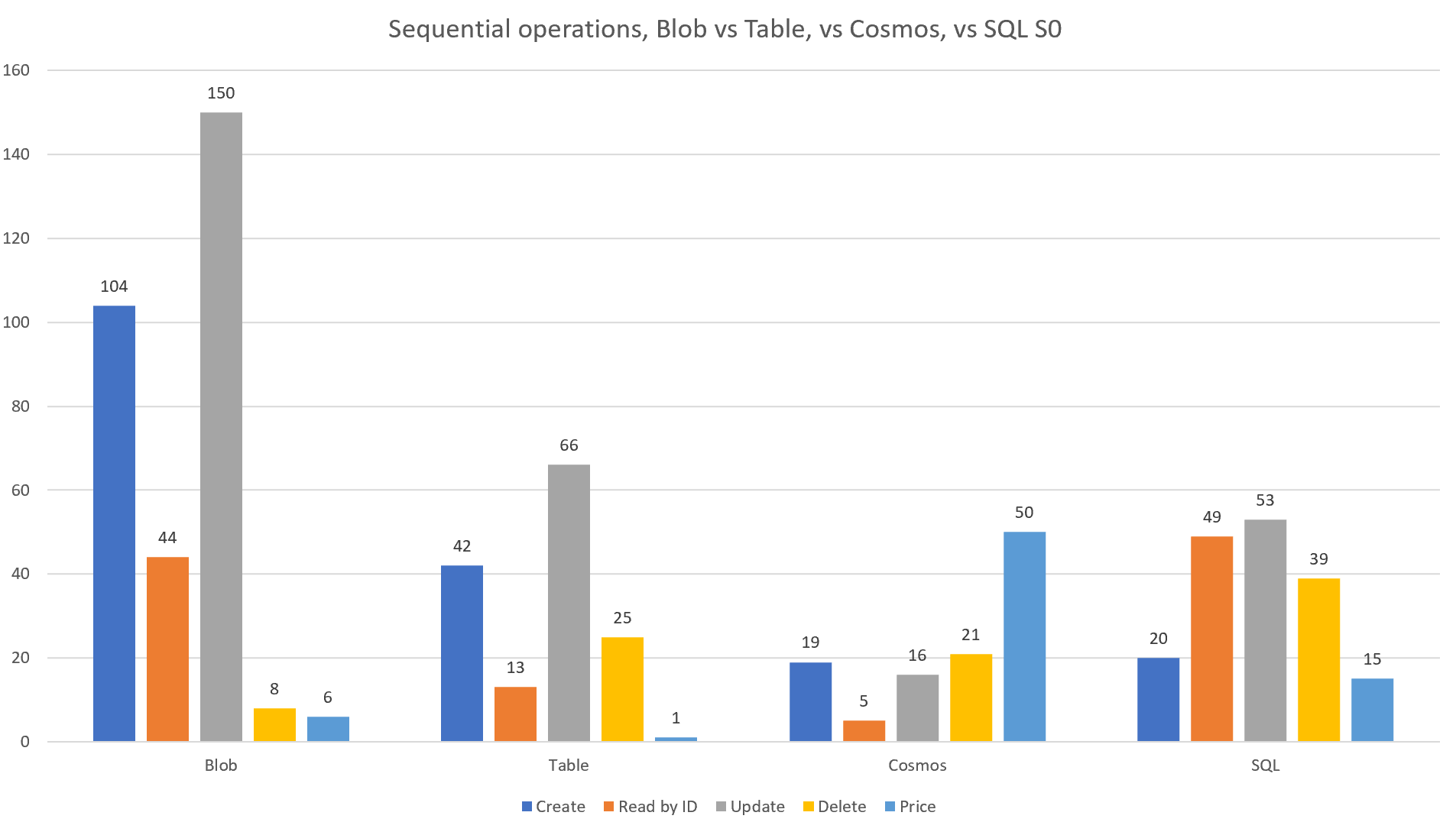 Here, we look at the different CRUD features along side a price point. The price is the approx. amount of USD I estimate it would cost per month to hold around 1 million of my data records with 1 million read and 1 million write operations. Cosmos is calculated at 800/1000 RU and SQL is the small S0 with only 10 DTUs. In all cases I've reserved around 5 Gb for storage (although the data is probably only about half that). Here are all my numbers:

Let's summarize a bit on these options:

I hope you have enjoyed this little Performance Series. I'll leave it at this for now, but I do have an idea for a little follow-up, that I'll probably post soon!

Make sure to drop me a comment here if you liked it!